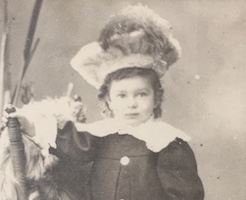 No Edwardian woman of taste and fashion was complete without an ostrich feather fan, boa, trimmed hat or edged cape. As the demand for ostrich feathers grew, many ostrich farms were established throughout NSW and workers developed the special skills required to dye, dress and curl the feathers. For over 20 years the Milton district had a thriving ostrich feather farm near Pigeon House Mountain, attracting premier feather dresser May Kiely to come and work there in the early 1900s.