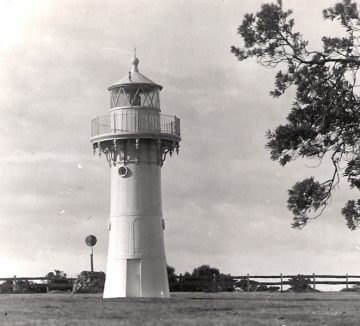 Written by on . Posted in Our Places, Our Stories

Coastal shipping was the lifeblood of small towns like Ulladulla in the late 19th century but it was also a dangerous business. Beneath the blue waters off the South Coast lie dozens of shipwrecks, often driven onto reefs during an East Coast Low, like the Walter Hood on 26 April 1870 in Wreck Bay, 12km north of Ulladulla.

Originally erected on the stone pier on the south side of Ulladulla Harbour in 1869-1872, after much local criticism that the lighthouse was ineffective in that location, it was dismantled and moved to Warden Head by Banks and Whitehurst in June-December 1889. Local bullock teams hauled the heavy iron plates from the harbour to Warden Head. The rebuilt lighthouse on Warden Head then completed a triangle with lighthouses at Montague Island (1880) and Green Cape (1883), necessary for sea navigation.

Designed by Edwin Orpen Moriarty and prefabricated by Joseph Mather of Sydney, the lighthouse is 12.1m above ground and 3.3m diameter at ground level, with a splayed base buried a further 2.3m deep in concrete foundations. There is a similar lighthouse at Wollongong Harbour.

Built from 16mm thick iron plate with butted, back-plated and rivetted joints, gunmetal decorative lantern framework and a copper-sheeted roof, the lighthouse has three timber floors connected by iron ladders and an iron railing balcony. An elevated arched door was rivetted shut when the lighthouse was relocated from the harbour. The round porthole windows are an unusual feature in Australian lighthouses. In the 1920s there was a windvane on top, since removed.

The fixed white oil lamp (visible for 19km) was converted to an automatic flashing acetylene lamp in 1920, and then electric power in 1964. Today, the group flashing of 2 every 10 seconds light extends 28km from Warden Head Lighthouse, still guiding ships at sea.

In 1890 a cottage was built next to the lighthouse for William Gambell, the first lighthouse keeper and his family, with a dome-covered water tank alongside. You can still see the dome of the tank today but the cottage itself was sold, dismantled and rebuilt in Milton after the lamp was automated in 1920.

Written by on . Posted in Our Stories

Milton Ulladulla Historical Society has been part of an exciting new project, funded by Create NSW and managed by Shoalhaven City Council to create digital records of our collection. Local and regional collections have such a wealth of place-unique historical information, and it’s important that everyone everywhere can access that information. By digitising our documents, photographs and objects as part of a new online catalogue, we can open up our resources to all. 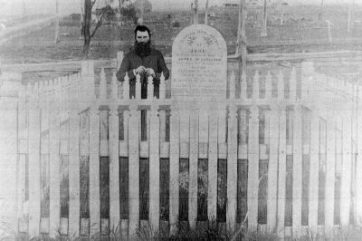 Written by on . Posted in Our Stories, People, Places

Some 500m distance from the Anglican Church of St Peter and Paul in Milton is its long-forgotten historic cemetery at 10 Croobyar Rd. Although there are no longer any visible headstones, the people buried there are an important record of Milton’s early years.

Walter Hood – the man, his shipyard, and the ship

Walter Hood is three things – the man, his Aberdeen shipyard and the elegant clipper he built there in 1852.